Tim Weske began studying theatrical swordplay and fighting 30+ years ago. In that time, Tim has trained thousands of people and choreographed thousands of fight sequences for film, television, commercials, theatre, and more. Like the great Hollywood sword masters before him, Tim became a competitor and instructor of competitive sport fencing.

Like his Mentors, Bob Anderson, Bill Hobbs, Ralph Faulkner and Fred Cavens, Tim has been able to take the balance, focus and tempo of fencing and apply it to theatrical swordplay.

The study of fencing is undeniably important in the development of a sword master. All people have tendencies and preconceived thoughts as to how stage combat works; like dance, and any other sport, there is a melding of the mind and body that must take place; many students want to do one or the other and often are unable to understand the importance of this connection. 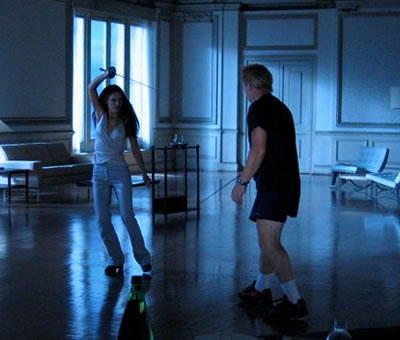 A quality instructor has both the knowledge to teach the student, but also the ability to help the student combine all of these extremely important elements together. A well versed instructor knows there are small things people do with their bodies that can hold the student back from learning; these things can cause the fight to have no tempo, seem staged or awkward, and most importantly be unsafe for the performers. A well versed instructor can get the performers stay consistently safe, on track, and performing to the best of their abilities.

Tim opened his own combat academy and fencing studio in 1992 and has been trusted to teach, coach and choreograph many Hollywood celebrities, such as Sandra Bullock, Brad Pitt, Chris Pine, Paul Rudd, Natalie Portman and many others.

Tim has created a system of movement that is safe, extremely realistic, and is broken down in a manner that make sense and is easily understood. With this system, master shots can and should be used as an editor’s base shot, while inserts can be used for affect, not out of necessity.

This system works with one on one duels to full scale battles; it works with all weapons and all genres of filmmaking. Tim works with and trains all actors and stunt performers, the project’s star to the scene’s deep background actors alike.

Tim’s focus and passion has always been the same, “It is about the safety and quality of the project, nothing else”.